Merry Christmas and and Happy, Safe and Prosperous New Year!

Thinking about this past year over the holiday season there seems to have been far too many tragic events that go against the “Peace and goodwill towards men” that Christmas season is supposed to take on. That being said, remembering as a kid seeing the announcements on television that NORAD was tracking Santa and he was soon to be arriving was a wonderful thing. Time to get in bed before Jolly Old Saint Nick showed up!

In thinking about all of this it reminds me that even at the height of bad times good still rises above it all – NORAD was tracking Santa and making sure that everything would be okay. Most (likely all) of us are far too young to remember the early days of the Cold War; however, many
of us do remember the U.S. bases in Newfoundland and Labrador. Even in the most stressful of time the good rises to the top. So, here is the story…

On Dec. 24, 1955, a call was made to the Continental Air Defense Command (CONAD) Operations Center in Colorado Springs, Colo. However, this call was not from the president or a general. It was from a young child in Colorado Springs who was following the directions in an advertisement printed in the local paper – the youngster wanted to know the whereabouts of 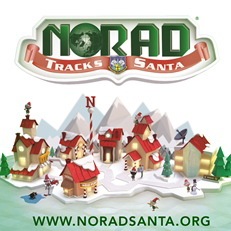 The ad said “Hey, Kiddies! Call me direct and be sure and dial the correct number.” However, the number was printed incorrectly in the advertisement and rang into the CONAD operations center.

On duty that night was Colonel Harry Shoup, who has come to be known as the “Santa Colonel.” Colonel Shoup received numerous calls that night and rather than hanging up, he had his operators find the location of Santa Claus and reported it to every child who phoned in that night.

Thus began a tradition carried on by the North American Aerospace Defense Command (NORAD) when it was formed in 1958. Today, through satellite systems, high-powered radars and jet fighters, NORAD tracks Santa Claus as he makes his Yuletide journey around the world.

Every year on December 24, fifteen hundred volunteers staff telephones and computers to answer calls and e-mails from children (and adults) from around the world. Live updates are provided through the NORAD Tracks Santa Web site (in seven languages), over telephone lines, and by e-mail to keep curious children and their families informed about Santa’s whereabouts and if it’s time to get to bed.

This year, children and the young-at-heart are able to track Santa through Facebook, Twitter and YouTube.  To follow us on any of these Web sites, type in @noradsanta into the search engine and start tracking.

So those of us who have young kids who still have the wonder of Santa Claus (and the older of us who still do!) we can still follow the Jolly Old Elf as he makes his trek around the world. (And, maybe, just maybe, get the kids in bed early!)

This site uses Akismet to reduce spam. Learn how your comment data is processed.