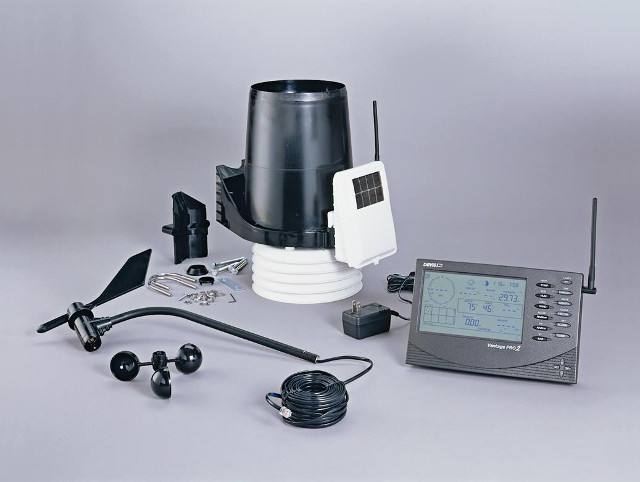 On Saturday afternoon (September 28th) I installed the new Davis Instruments Vantage Pro2  (VP2) weather station with the IP-based WeatherLink IP data logger. I installed the Integrated Sensor Suite (ISS – Davis-speak for the combined rainfall and temperate sensor with the transmitter) and the anemometer (which is separate from the ISS and linked by cable) on the same rooftop pole the old Oregon Scientific WMR200 is still mounted. I left the WMN200 in place because I wanted to see the delta – there are difference between the VP2 and the WMN200 in all areas – I’m not sure about the rainfall: we haven’t had any rain since the installation, of course.

The change-over in the Cumulus weather station software was seamless. Of course I thought it would be – I have a VMware Workstation image of the weather station to do the initial testing. And given that that OS is a virtual machine running on VMware ESXi 5.1 I cloned the virtual machine – nice to have a good solid backup – and then changed the station type and communications mode to VP2 and IP. Actually, I initially forgot to change the communications mode to IP and was confused for a few minutes.

(ESXi is free as in free beer and if you are doing any development or simply want to consolidate your compute instances this is the way to go. You should have certified hardware but I have colleagues who what done it on non-certified hardware – network cards can be difficult but there are cheap cards that are supported.)

Everything is up-and-running just fine. Cumulus (Sandaysoft) recommends going to the beta 1.9.4 but I don’t see any problems yet. I don’t like running beat software on production systems. If there is a problem I guess that it is backup-and-upgrade.