A Newfoundland and Labradorian's Pilgramage 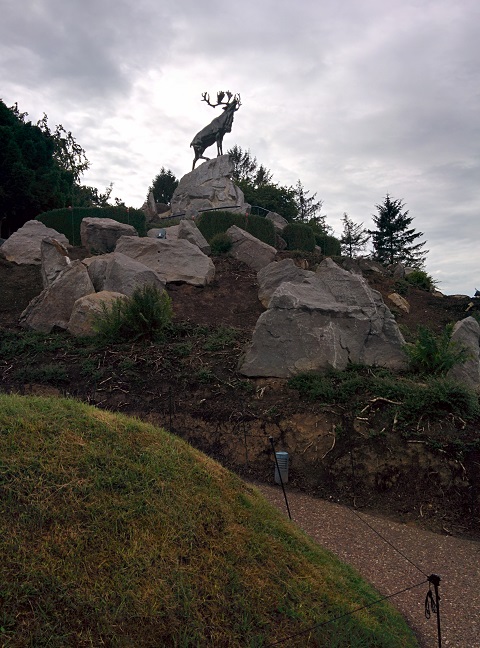 As most people know, this is the one hundredth anniversary of the start of World War One. The Great War. The War To End All Wars. It wasn’t of course. I tend to think of this as World War (Part I) with World War II being World War (Part II). Other will likely disagree with me both on my thought process and the philosophy of it all but anyway…

With one hundred years going by the probability is that there are no Great War veterans left with us. If there are, they could likely be counted on both hands. The first-person accounts that have not been recorded are now silenced. My grandfather on my father’s side was a veteran. He was at Gallipoli along with the British, Australians and New Zealanders. My grandfather never talked about Gallipoli. Well almost never. The one story I remember is about how bad the flies were. You would butter a piece of bread and by the time it reached your mouth it was black. From the flies that had pitched on it.

Most people forget that the Newfoundland Regiment fought there especially since Newfoundland and Labrador was absorbed by Canada and Canada did NOT fight in Gallipoli. Those of you who know history know that Gallipoli “made” New Zealand and Australia more than just dominions (as Newfoundland, and Canada, was at the time) but let to the move to being self governing countries. Just a the Battle of Vimy Ridge “made” Canada a nation. Newfoundland was not so fortunate.

However, this is not an entry about Gallipoli. Or about Vimy Ridge. This entry is about the Battle of Beaumont-Hamel. My grandfather was “lucky”: After being evacuated (which seems to be a quaint British term for retreated and abandoned) from Gallipoli they were are assembled in Scotland for retraining. Apparently my grandfather was doing “KP” (kitchen duty) when the lye that was used for cleaning spashed in his eye leaving him partially blind (I used to think that he was standing around a fire barrel when a “flanker” from the fire landed in his eye). Or as the discharge document states: Being no longer fit for war service. Lucky is because after the first day of the Battle of the Somme, July 1st 1916, 733 of the 801 men in the 1st Newfoundland Regiment were killed or wounded.

The first day of the Battle of the Somme was traumatic for the small Dominion of Newfoundland as much as the Great War was a catastrophe. So much so that July 1st was designated Memorial Day.

With this background when we decided to travel to Europe this past June/July with Paris on the itinerary I talked with my wife and she graciously agreed that we would journey to Beaumont-Hamel. And the timing could not have been better for we would be able to be there for July 1.

Taking the TGV from Paris to Arras was a wonderful experience. For those of you who have not traveled by rail, especially high speed rail, in Europe it is simple great. Think about it: The stations are in, more or less, the middle of the city/town. There is no security to go through. No baggage check. And the train travels at 300 km/h. 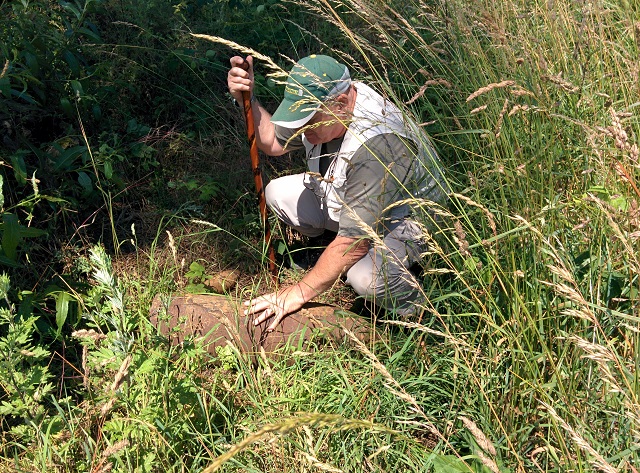 Dave Plat and a 9.2 Inch Shell

We stayed at the Beaumont-Hamel View run by David Platt and his wonderful wife Anita. Dave is an ex-Royal Army man with a passion for Great War history. Dave also runs some prepackaged tours but is more than happy to create on just for you based upon what you would like to see. Knowing that we were Newfoundlanders he created a tour centered on the Newfoundland Regiment but with a view to the bigger picture.

Above is a picture of Dave and a live 9.2 inch British shell. Yes, it is still live after almost 100 years. Dave answered my question to whether people were still being killed by these shells today by saying about five French farmers had been killed so far this year. There is a special team, if I am correct not from the French military, whose expertise is getting rid of these shells. For most of the shells – you can slightly see a smaller 4 pounder (I think) shell in the picture – are taken away and detonated. However, the 9.2 inch shell would likely be detonated in place.

Dave also has the wonderful practice of picking out a name of the fallen for those on his tours. When you go to their grave you speak their name aloud. It is likely the first time in nearly 100 years that someone has visited their grave and spoke their name aloud. Dave had picked out Captain Eric S. Ayres of the Newfoundland Regiment. We spoke his name at the Ancre British Cemetery. He is remembered…

The Beaumont-Hamel Newfoundland Memorial is a very thoughtful place. (And it is only a 10 minute walk down a country road from the Beaumont-Hamel View.) You can get more information by clicking on the Wikipedia link above but here is a very brief synopsis: 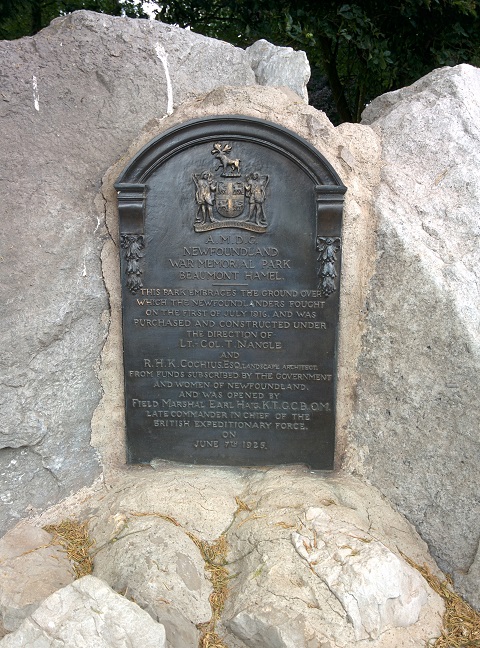 Newfoundland purchased the ground over which the Newfoundland Regiment made its unsuccessful attack during the first day of the Battle of the Somme in 1921. This was during the period when Newfoundland was still a dominion and not part of Canada. Many give credit for the establishment of the 74-acre memorial site to Lieutenant Colonel Tom Nangle who was the former Roman Catholic Priest of the regiment. The Newfoundland Memorial was officially opened by British Field Marshal Earl Haig in 1925. Since joining Canada in 1949 the memorial site is one of only two National Historic Sites of Canada located outside of Canada with the other being the Canadian National Vimy Memorial. 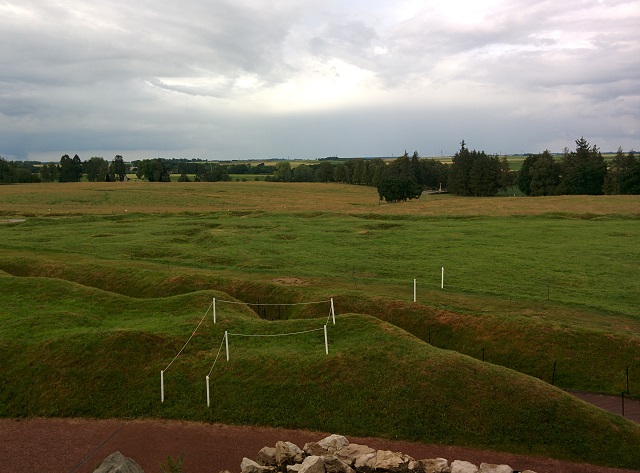 The Newfoundland Memorial includes the much of the “Newfoundland battlefield.” You can still see the trench-line in the foreground with shell holes beyond. In the distance you can see the main Newfoundland cemetery in the distance. My only complaint is that they have let the tress grow up in much of the areas so you cannot see the landscape as the boys would have (less the grass, of course). (An aside: They use sheep to keep the grass “mowed”. There seems to be two reasons for this: (1) The terrain is very uneven so I doubt you would be easily able to mow it. (2) There are still unexploded ordinance under the ground…) 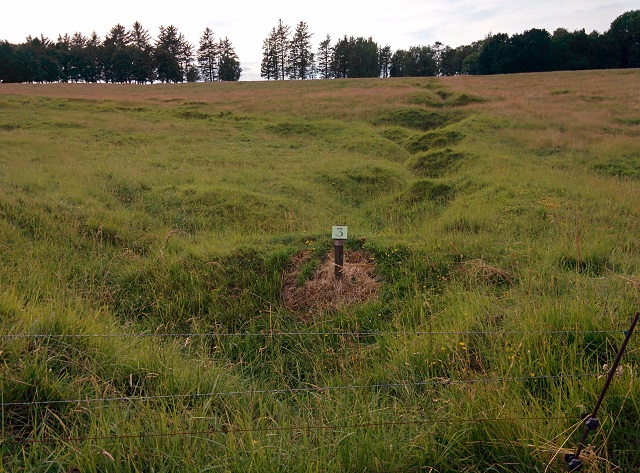 Looking Up from the Y Ravine

This is the view looking up from the Y Ravine. You can still see the trenchlines and shell holes. 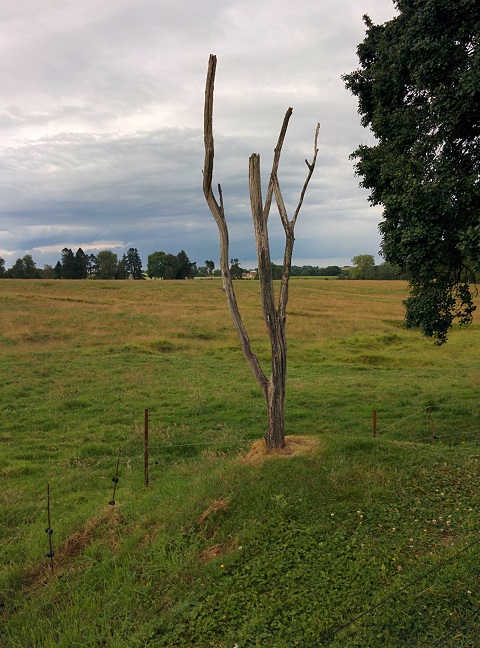 Most Newfoundlanders who read about the war will remember talk about the Danger Tree. The Danger Tree had been part of a clump of trees located about halfway into No Man’s Land and had originally been used as a landmark by a Newfoundland Regiment trench raiding party in the days before the Battle of the Somme. During the Newfoundland Regiment’s infantry assault the tree was used as a landmark where the troops were ordered to gather. However it was also highly visible to to German artillery and German shrapnel was particularly deadly. Because of this the regiment suffered a large concentration of casualties around the tree.

Finally at the “bottom” of the hill you reach the cemetery. One of many scattered through Northern France. Words cannot describe the feeling when you stand there. 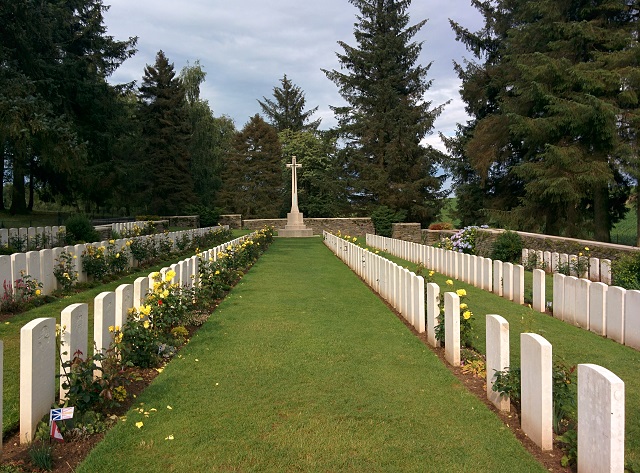 The ceremony of remembrance started around 4:00 PM. It was moving to see all the military attachés from the United Kingdom, Australia, New Zealand, Canada and South Africa. Plus you had all of the French veterans in attendance. The French – they DO remember.

After the ceremony and after we had supper my son mentioned that he had brought a rock – a piece of Newfoundland – for the boys who would never make it back home. It was late in the evening with a leaden sky but pink on the horizon. We were the only two in the Memorial. My son seeing the second cemetery mainly for the 51st (Highland) Division Monument (Beaumont-Hamel) (also included in the Newfoundland Memorial) wanted to place the rock with the Newfoundlanders there.

Since they were not with their friends in the main cemetery…

As we were walking back he said to me – This is a very peaceful place. It felt… like being home… 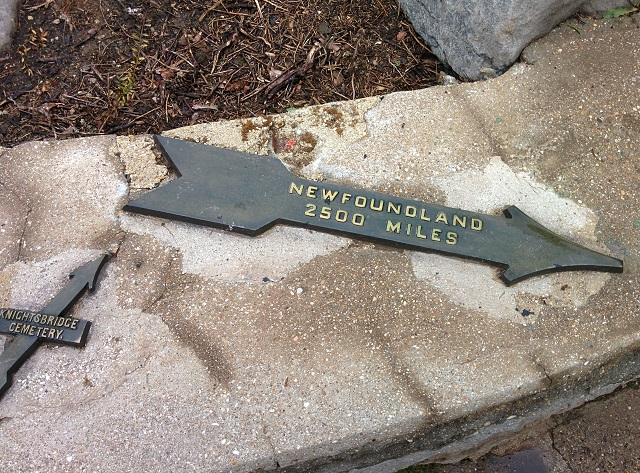