Time Waits for No One

It is true: Time waits for no one.

My old Synology DS211j that I bought back in 2011 finally showed that it is in its not-so-golden years. With every firmware upgrade the DS211j was becoming slower and slower. File shares were taking minutes to populate, DNS was slow responding – or not at all, logins to the web page were slow – or did not complete. Even ssh connections would time out. The old Marvell Kirkwood 88F6281 at 1.2 GHz. It only has 128 MB of RAM. That is not a lot of horsepower to run the latest Synology DSM 6.1 firmware. In fact, I seem to recall that at 6.0 (or one of the subminor versions) there was a warning that it might cause slowness. Well, there is slowness and then there is s l o w n e s s.

Something had to be done. Both my loving wife and son were not so understanding when they could not connect to Netflix or Youtube (DNS lookups were timing out) and my wife was justifiably concerned when she could not access almost 7 years of digital photos. Quickly (well, not so quick – it took forever) backups to external USB hard disks and to a FreeNAS VM I had set up on my ESXi server were executed.

I have a QNAP NAS that I use for streaming digital media – it seems to do that better than the DS211j, but that might be a result of being a few years younger – but QNAP does not have all of the packages that Synology has; namely: BIND (DNS), etc. Some may suggest looking at other vendors but, in my opinion, Synology’s DSM is one of the best for SOHO (or geek-minded) solutions.

But which Synology model?

Remember, this was basically an “emergency” purchase so it was not like funds had been squirrelled away. I also needed new disks as the 1 TB are somewhat small) even though the “big” stuff like movies and music are on the QNAP) and a few years old. So this was not only the replacement of the NAS but the storage as well. 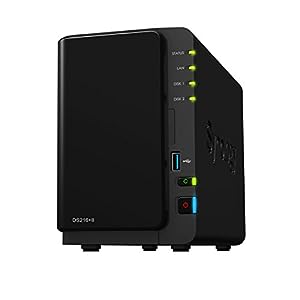 After doing a few days of reviews and looking at prices the DS216+II was my choice with two new WD Red 2TB drives. Some will ask why not 3 or 4 TB drives but remember: this was not a planned purchase so the budget was tight.

The 216+II has much more horsepower. It has an Intel Celeron N3060 64-bit dual-core at 1.6 GHz with burst up to 2.48 GHz. It as 1 GB of RAM. The RAM is technically non-upgradeable but there are sites that document the process of how to upgrade the RAM to 4 GB. It is not that the RAM is soldered to the motherboard, it is standard laptop RAM, but it is buried under everything so that entails a more-or-less full disassembly of the NAS. NOTE: This will void your warranty!

I can also use an external drive array such as the DX513 using the eSATA port to increase space if I need it. Some would say that the DS716+II would be a better option as it would let me span the RAID array across the external enclosure (more RAM, faster CPU, too). But, in thinking about it, this is an eSATA connection and I would not want to trust that to spanning the array. Lose the connection and bad things can happen.

Okay, that was decided. Orders placed. Now, how to migrate the data?

Google is not always your friend; the search results kept returning how to migrate for DSM 5.x. DSM 6.x is the current version. After some searches on Synology’s site I found the information. (It is here if anyone is looking: How to migrate between Synology NAS (DSM 6.0 and later)). The interesting thing is that it allows you to migrate architectures by swapping the drives to the new NAS – ARM-to-x64. However, after thinking about it that is not the way I decided to go.

I had a couple of options:

Backup and restore it was. It took over 30 hours for the backup (from the DS211j to the DS216+II). This is likely because of the older hardware encryption chip on the DS211j and that it just could not pump the data quickly enough through the gigabit Enternet port. Restore, on the other hand, took all of 50 minutes.

Once that was done I re-created the shares and permissions, shutdown the DS211j, changed the server name and IP on the DS216+II to the old DS211j’s, and restarted…

And everything seems to work! And it is fast. The best example I can give (for us “old folks”) is the performance increase we saw when moving from a Pentium 166 to a Pentium II 350. Simply amazing!

The next steps are to let the DS211j sit on the shelf for a couple of weeks to make sure that nothing is missed, set up the backups again, etc.

What to do with the DS211j? I am not sure a this point. I am considering flattening the drives and do a fresh install of DSM 6.1 and only have the DNS server running on it. (Why an internal DNS not to mention two? Well, once you start counting up the number of network devices – I have over 40 devices – that is what DNS (and DHCP) are for!)

This site uses Akismet to reduce spam. Learn how your comment data is processed.